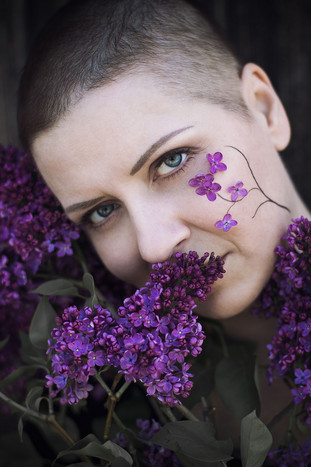 On July 18th 2017, the exhibition “Cancer has a Face” opened at the town hall of Schriesheim. The exhibition was organized by the AWO-Rhein-Neckar e.V., supporting the project of young cancer patient Vanessa Weil. 15 photographers interpret Weil on 13 pictures in different ways. The pictures are part of a calendar that will be sold in support of the NCT. From August 8th onwards, the exhibition will move to the NCT Heidelberg for two weeks. All pictures will be auctioned in a charity action on October 26th in Schriesheim. Proceeds will benefit a guiding program, initiated by Vanessa Weil.
The NCT Heidelberg is a joint institution of the German Cancer Research Center (DKFZ), the University Hospital Heidelberg and the German Cancer Aid.

On August 8th 2017 at 2.30pm, Professor Dr. Dirk Jäger, Managing Director of the NCT Heidelberg and Kirsten Bikowski, Self-Aid Designee at the NCT, will be opening the traveling exhibition of Vanessa Weil, which will be displayed at the NCT until August 18th 2017. The pictures of Vanessa Weil are part of a calendar that can be preordered online at www.krebs-hat-ein-gesicht.de. “I have cancer- but I am a lot more than that”, explains Vanessa Weil her project. “I want to show that cancer means not only sadness, pain and death.”

Proceeds from the calendar sale and the charity auction on October 26th in Schriesheim will benefit a guiding program for patients at the NCT. Vanessa Weil wants to enable cancer patients to be guided by “experienced” mentors after the first diagnosis. Due to an incidental finding, the 39-year-old Schriesheimer was confronted with this difficult situation herself two years ago. Today, she has incurable yolk sac cancer. “I was very lucky to be accompanied from kind people right from the beginning”, says the 39-year-old. The guiding program is meant to be financed through the project “Cancer has a Face” and will start in October 2017.
The pictures of the traveling exhibition display Weil in very different ways. Together with 15 photographers she interpreted the topic cancer in order to express her intention “to give cancer a face for all those, who do not have the guts to adhere to it, for those without hope and those who are simply sad”.

The traveling exhibition, which opened in the town hall of Schriesheim on July 18th 2017, will be displayed until August 18th at the NCT Heidelberg and until October 20th in further local institutions. The project is organized and supported by the Schriesheim-community and the AWO Rhein-Neckar e.V.

We warmly invite you to the opening of the exhibition on August 8th 2017 at 2.30pm at the NCT Heidelberg in the Neuenheimer Feld 460, 69120 Heidelberg.

You will be welcomed by

Dates and locations of the exhibition:

NCT hosts exhibition “Cancer has a Face” from August 8th until August 16th. Invitation to the opening of the exhibition on August 8th 2017 2017
OnkoAktiv dehnt sein Netzwerk nach Coburg aus